Yesterday, F and I laced up (or in his case, Velcroed) our sneakers, grabbed a bottle of water and hit the pavement after a long, busy day of being out and about in the sunshine. Lately, F has wanted to take a stuffy with him everywhere he goes, and he chose his Princess Toadstool for our evening outing. With his toy in arm, he jogged along next to me with a big smile on his face. Cars waiting at the red light smiled at him as we plugged along down the sidewalk.

Around the 1km mark, F began asking if we could stop. I quickly realized what the problem was: he was angry that I was ahead of him, and I took it as a teachable moment – even if it meant that my run was shot before I’d even broken a sweat.

I’m often told that I’m hard on F, though on the other hand I have a few critics who accuse me of being too soft. But that’s a mother’s role: equal parts hard and soft.

Though F won’t sleep alone, it’s his job to “make” his bed. He sorts the laundry, and he puts half of it away. Yesterday, he swept up his mess in the kitchen. He also had to clean up the apple juice he spilled all over the backseat of my car after I had asked him several times to stop blowing bubbles with it.

I can forgive accidents, and I do so easily and without laying blame because accidents happen. I will not forgive carelessness or recklessness so easily, especially when I’ve spoken to F about his behaviour. And he has to work for forgiveness when he is unkind.

As we turned onto the trail we were running on to take us to the playground, F became more and more upset. “You’re faster than I am, Mama and it’s not fair! I don’t want to go to the playground.” F doesn’t take well to not being “the best”. I went back to him and explained that my legs are longer than his (for now) and that I’ve had a lot of practice running, and many – if not most – runners are faster than I am. It’s not about being the best, but about being your best.

F reminds me a lot of myself when I see him giving up like that. I can remember my early report cards from teachers saying “Gives up easily,” and it was true: if I couldn’t do it perfectly the first time, I threw in the towel. F is on the same learning curve, and I know that it comes with a lot of heartache.

My run didn’t go the way I had planned last night. F was tired and cranky and whiny on the trek home. He wanted to be carried. He wanted me to leave him on the sidewalk, go get the car, and come back and get him. I knew his legs were tired, but I made him keep walking. As we turned into the parking lot, he suddenly perked up. “Mama, you were right! I did the whole walk. I did it!” 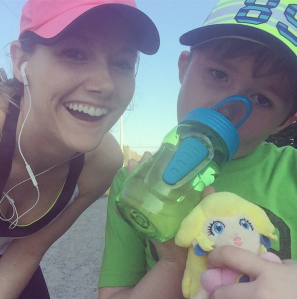 And then we ate nachos, because balance.

go back in time